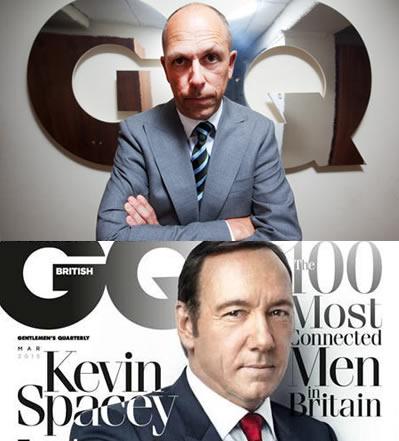 Tickets are £18 including a glass of wine - CLICK HERE TO BUY TICKETS (All online purchases will be redirected to the V&A website. Please note all talks are listed under the title of the series Always Print the Myth but not the name of each individual talk. This means that once you enter the ticketing site you will need to look for the talk you'd like to attend according to its date (ie - Dylan Jones is the 21st April).

Join us After Dark to hear Alan Edwards (the PR legend whose clients include Bowie, Led Zeppelin and the Who) in conversation with Dylan Jones OBE, the editor of GQ magazine.
Dylan Jones is editor-in-chief of British GQ, the country’s premier men’s title, and the chair of London Collections: Men. He has won the BSME Editor of the Year Award seven times, including five awards for his work at GQ, and has written several critically acclaimed books, including Cameron on Cameron, and a biography of Jim Morrison. He was awarded an OBE in 2011 for services to publishing.

Jones’ journalistic career began at i-D magazine in 1983; incredibly he was made editor-in-chief of the magazine just a year later, a position he would hold until he was appointed to the same role at Arena in 1987. Concurrent to this, Jones was a contributing editor to The Face; other notable positions in his career include being associate editor at The Observer Magazine when the publication was relaunched with Simon Kelner, and a variety of positions at The Sunday Times.