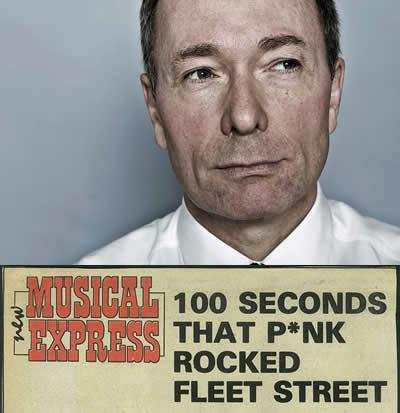 Tickets £18 including a glass of wine - CLICK HERE TO BUY TICKETS (All online purchases will be redirected to the V&A website. Please note all talks are listed under the title of the series Always Print the Myth but not the name of each individual talk. This means that once you enter the ticketing site you will need to look for the talk you'd like to attend according to its date (ie - Tony Parsons is the 23rd April) )

Join Alan Edwards at the V&A for an after dark talk with Tony Parsons, one of NME's "hip young gunslingers" of the 1970s chronicling the punk movement who went on to become one of the UK's most successful authors and journalists.

Tony Parsons is a British journalist broadcaster and author. He began his career as a music journalist on the NME, writing about punk music. Later, he wrote for The Daily Telegraph, before going on to write for the Daily Mirror, GQ, and most recently The Sun on Sunday.
He is the author of the multi-million selling novel, Man and Boy (1999). Parsons had written a number of novels including The Kids (1976), Platinum Logic (1981) and Limelight Blues (1983), before he found mainstream success by focussing on the tribulations of thirty-something men. Parsons has since published a series of best-selling novels – One For My Baby (2001), Man and Wife (2003), The Family Way (2004), Stories We Could Tell (2006), My Favourite Wife (2007), Starting Over (2009) and Men From the Boys (2010).