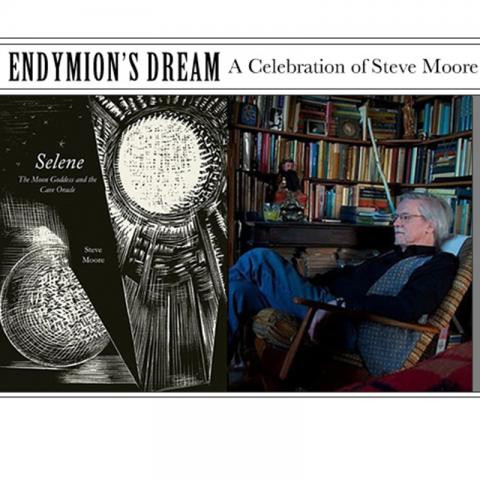 A Celebration of Steve Moore with Alan Moore, John Higgs and Andrew O'Neill

In March 2014, British comics lost one of its most innovative and and original voices in the form of Steve Moore. The father of 2000 AD's Future Shocks, Steve gave life to a host of memorable characters including Laser Eraser and Axel Pressbutton for Warrior, and the psychotic Dalek killer, Abslom Daak for the Doctor Who Magazine.

Join us at Brompton Cemetery Chapel with Strange Attractor Press to mark the publication of Steve Moore’s final, posthumous book, “Selene: The Moon Goddess and the Cave Oracle”, an examination of the origins, dream-explorations and mystical practices centred on the Greek deity Selene. The life of Steve Moore and the enduring mythology of the moon goddess will be discussed in conversation with Steve’s close friend and regular collaborator Alan Moore, the legendary author and graphic novelist, John Higgs, the author of 'Watling Street' and editor of ‘Selene' and Andrew O’Neill, the comedian and author 'A History of Heaven Metal'.

Steve Moore - Until his death in 2014, Steve Moore wrote comic books, novels and nonfiction, including a study of the I-Ching, 'The Trigrams of Han', a critically acclaimed novel, ‘Somnium', and a count ollection of short fantasy stories, 'Tales of Telguuth'. He also had a long-standing editorial connection with 'Fortean Times', to which he was a frequent contributor from their inception.

Alan Moore (no relation) - Alan Moore is an English writer known primarily for his work in comic books including Watchmen, V for Vendetta, The Ballad of Halo Jones, and From Hell. Regarded by some as the best graphic novel writer in history, he is widely recognised among his peers and critics.

John Higgs - John Higgs is a writer who specialises in finding previously unsuspected narratives, hidden in obscure corners of our history and culture, which can change the way we see the world. In the words of MOJO magazine, “Reading John Higgs is like being shot with a diamond. Suddenly everything becomes terrifyingly clear”.

Andrew O’Neill - Andrew O'Neill is an occult stand-up comedian, musician and writer. His distinctive voice and alternative credentials have set him apart and allowed him to carve out a unique place in the comedy world. O'Neill has written and toured a shit-tonne of solo comedy shows, including Occult Comedian, Winston Churchill Was Jack The Ripper, MINDSPIDERS, Alternative, Andrew O'Neill is Easily Distracted and the current Andrew O'Neill's Black Magick Fun Hour.