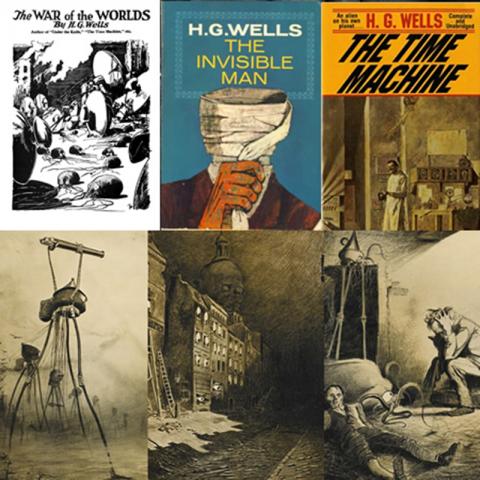 When H.G. Wells left school in 1880 at the age of thirteen he looked destined for obscurity. Defying expectations, he became one of the most famous writers in the world. Wells is most remembered for his incredible tales of speculative / science fiction including The War of the Worlds, The Time Machine and The invisible Man amingts many other novels and stories of 'scientific romance' He remained active into the era of the atomic bomb, which he predicted by thirty years. Join biographer Michael Sherbourne, vice-president of the HG Wells Society to hear of the life of one of the greatest Victorian Visionaries.

In this talk, historian Dr Sherborne will put Wells’s scientific romances into the context of his versatile career as an author, showing how he managed to integrate fantastical concepts like time travel and alien invasions into the context of everyday Victorian life. Sherborne will examine how a century after they were written Wells’s futuristic visions, such as The Shape of Things to Come, may have dated, sometimes in quite comical ways, but nonetheless remain compelling.

Michael Sherborne is the author of the biography HG Wells: Another Kind of Life. A vice-president of the HG Wells Society, he has written, lectured and broadcast widely on all aspects of Wells’s life and work. He has also written Advanced Level study guides on Shakespeare, Orwell and Huxley, as well as two comic novels. In 2018, he won the Shaw Society Playwriting Award with a humorous one-act play about Brexit.