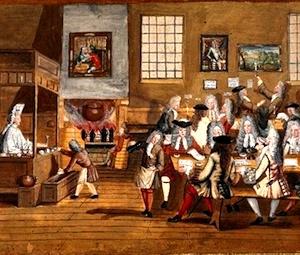 Our inaugral evening will feature Dr Matthew Green (writer and guide) on London's 17th century coffee house and Marcus Risdell (archivist of the Garrick Club) on London's Gentlemen's clubs.  A soundtrack for the city will be provided by The Clerkenwell Kid

Dr Green’s illustrated, caffeinated talk will take you on a whirlwind tour of London’s original - and best - coffeehouses. Hear the story of how, in 1652, a bitter black drink from Turkey transformed the face of London forever, brought people together, and inspired brilliant ideas that would shape the modern world. Immerse yourself in the cosy, smoky atmosphere of the Georgian coffeehouse and hear tales of all that went on inside: from dolphin dissections to lethal duels over Latin grammar, from inquisitions of insanity to salacious gossip-mongering. Feel a tinge of nostalgia for the lost, candlelit world of flickering conviviality, intellectual enlightenment, and unbridled creativity as our streets are invaded by bland Starbucks clones. Free shots of gritty black coffee, brewed 17th-century style, included.

Marcus Risdell will then describe how the earliest London Clubs met in the Coffee Houses and Inns of 18th century London.
Here, behind closed doors, gentlemen(and they were predominantly gentlemen) could enjoy each others' sociability whilst gaining access to an exclusive network of contacts. The 19th century witnessed an explosion in Club making catering for all classes and occupations.

There were clubs for authors, for the theatrical profession, for travellers, reformers, soldiers and politicians of all colours: even one for mountaineers.  Quite a few survive today.

This talk will open a door onto this most private world and offer a peek at London’s unique Clubland.”

Dr Matthew Green graduated from Oxford University in 2011 with a PhD in the power of the press in 18th-century London. He works as a writer, journalist, broadcaster and tour guide writing historical features for the Guardian, Telegraph, History Today and Tate Etc.
He is co-founder of Unreal City Audio, which produces immersive, critically-acclaimed tours of London with actors, musicians, and shots of 17th-century coffee.   He is working on a popular history book entitled The Lost World of the London Coffeehouse, a portion of which will be published via the Idler Academy in December 2012.

Marcus Risdell is curator of the Garrick Club and an art and theatre historian. After graduating from St Andrews and the Courtauld Institute of Art he became a freelance cataloguer and researcher working on digital catalogues and inventories for the Garrick Club and the Mander & Mitchenson Theatre Collection.

As Curator and Librarian at the Garrick Club he launched on-line catalogues for both the Club’s art collections and library. He is author of "The Young Davy Garrick; Rise of a Superstar" for a book to accompany the Dr Johnson’s House exhibition Behind the Scenes: The Hidden Life of Georgian Theatre, 1737-1784,

In 2009 he co-curated The Face & Figure of Shakespeare, an exhibition of eighteenth-century sculptures of Shakespeare at Orleans House Gallery, Richmond, London, the catalogue of which was listed for the Berger Prize for British Art History.

He is co-chair of the Association of Performing Arts Collections (formerly Theatre Information Group) and sits on the Committee of the Society for Theatre Research.
Marcus is also a mountaineer.