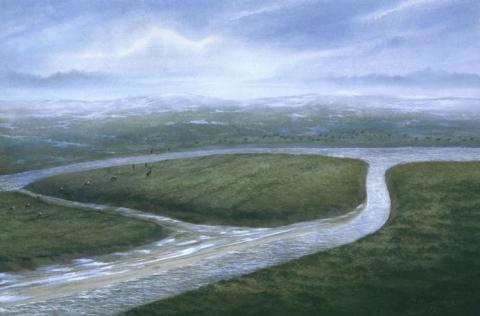 SALON NO. 73: THE SACRED THAMES - POSTPONED
River, religion and ritual
POSTPONED DUE TO YOU KNOW WHAT
Westminster Arts Library
35 St Martins Street
London
WC2H 7HP
Each ticket includes an offering of Hendricks Gin

In Kipling's 'The River's Tale', the Thames itself tells of its journey from prehistory to the present and indeed there is perhaps nothing that says more about London's sacred history than our river. Join folklorist GEORGE HOYLE and archaeologist NATHALIE COHEN as we row deep into its myth and mystery.

The spirits of London's river have been worshipped for millenia in the changing tidal places, where the hidden tributaries emerge, between eyots & on the shifting shores. There are ancient causeways & soul bridges, lost remnants of previous cultures  - if you know where to look says folklorist GEORGE HOYLE as he takes us on a mythic journey from the old ways of the rivers tale to the new.

People have been depositing all sorts of items as offerings in the waters of the river for thousands of years whilst communities have buried their dead on the foreshore and performed ceremonies by the river’s edge.

Archaeologist NATHALIE COHEN will discuss aspects of religious and ritual activity along the River Thames, from the medieval period  to the present, using artefacts found on the foreshore, as she examines some of the ways in which people have commemorated their lives and London in their river.

GEORGE HOYLE is a musician and runs the South East London Folklore Society. he performs regularly as part of London Dreamtime events with storyteller Vanessa Woolf.

NATHALIE COHEN works as a regional archaeologist for the National Trust and as the Cathedral Archaeologist at Canterbury Cathedral. Previously, she led the Thames Discovery Programme (community archaeology on London’s foreshore) for ten years.