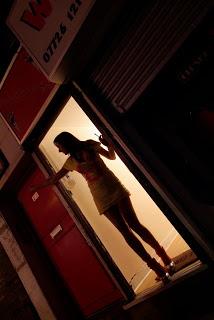 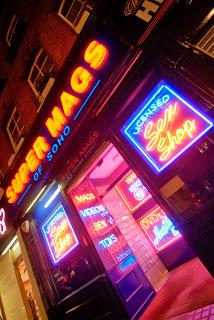 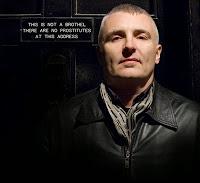 Admission: This Event is SOLD OUT

What is it about the small district of Soho that has made it such an intense collision of business, entertainment, history, bohemia and sleaze? What is a day in the life of a Soho sex worker like? The province of Bohemians, Italians, Maltese, Chinese, spivs, gangsters, pimps, prostitutes and most recently the gay community, it remains the London district most associated with sexual activity and is still controversial. Why? Salon Number 12: Sex in the City investigates.

Through video and images Clayton will describe the various transformations that have taken place, talking about The Windmill Theatre and The Raymond Revuebar in the 50s, the abundance of prostitutes, clip joints and ‘walk ups’ in the 60s, the commercialised sex scene of the 70 and the tightening of licensing controls in the 80s, until the gay scene took over in the 90s.

Clayton will be joined by The Soho Hobo, singer-songwriter Tim Arnold whose grandfather worked with the legendary Paul Raymond, whose mother danced at The Windmill Theatre and whose first memory is 'the view from the stage door of the Queen's Theatre'.

The talk will also draw on the famous characters associated with Soho, people like 19th Century cross-dressers Fanny and Stella, Oscar Wilde, murderer Dennis Nielsen and the sex scandals they’re associated with - as well as others associated with Soho’s seamier side: the flamboyant Quentin Crisp, the singer Marc Almond and Soho dandy Sebastian Horsley. Clayton will also share some personal stories of living and working below a brothel, befriending 'the girls upstairs’ and accompanying them to court to help them stay working.

Will the recent gentrification of Soho result in the loss of an important, historical and cultural aspect of the city?Is the current 'clean up’ of Soho really needed? In December, hundreds of police descended on Soho premises with the intention of making the area a safer place to live, work and visit. But for who?

Cari Mitchell will join us to talk about these questions and to talk about the work of The English Collective of Prostitutes. The ECP, with Soho Working Girls, is currently spearheading a campaign against police closures of the Soho walk-up flats where women have traditionally been able to work in relative safety. According to the ECP, most of the women thrown out of premises were mothers and grandmothers working safely and collectively who have now lost their livelihood.  Support has come from many Soho residents and businesses who fear that if the “girls” go, Soho will become just another enclave for the super rich.

Clayton Littlewood is the author of Gay Times Book of the Year  'Dirty White Boy: Tales of Soho' - a diary based on his personal experiences running the Soho Dirty White Boy clothes store.  Drawing comparisons with Pepys, Virginia Woolf and Christopher Isherwood,  the book developed from a cult blog and popular column in The London Paper into a play premiered at the Trafalgar Studios in 2009. In 2012, Clayton published a sequel, "Goodbye to Soho".

Tim Arnold  signed his first record deal with Sony as the front man of 90s Britpop band Jocasta, embarking on a successful career in the music business. He has released 14 albums, including the critically acclaimed "Secrets of Soho" currently being developed into a musical at The Royal Academy for Dramatic Arts.

Cari Mitchell is a spokeswoman for The English Collective of Prostitutes (ECP) – a network of women of different nationalities and backgrounds working in different areas of the sex industry.  Since 1975, the ECP has been providing daily support to sex workers and their families and campaigning for the decriminalisation of prostitution, for safety and for financial alternatives so that no one is forced into prostitution by poverty or violence.