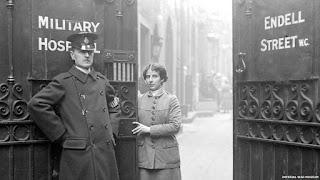 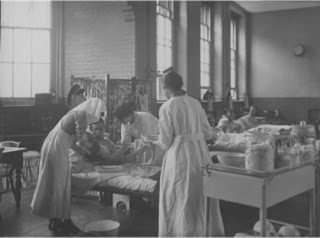 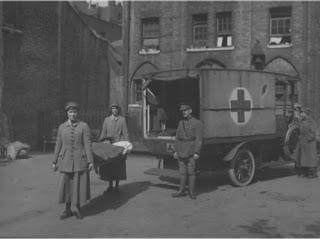 SALON NO.80: LONDON WOMEN IN MEDICINE- Fighting the Secret War:

TICKETS £4.50 -Joining and attendence details will be emailed to you nearer the event. Bring your own refreshments :)
There are many forgotten, lost or neglected London histories. At this month’s Salon, (OUR 80TH BIRTHDAY!), we celebrate one - the story of some of the most pioneering London women in medicine in the city -
with writers, WENDY MOORE and CHARLIE FORMAN

When war broke out in August 1914 thousands of men volunteered to serve their country. Women volunteered in their thousands too but women doctors who offered their services were told to “Go home and sit still”.
But Flora Murray and Louisa Garrett Anderson refused to sit still. They were qualified doctors, suffragettes – and life partners – and they took a unit of women doctors and nurses to Paris.  They ran a hospital so successfully there that the army invited them to set up a second hospital in France and then – in May 1915 – to run a major military hospital in the heart of London.

Endell Street Military Hospital was unique. It was the only hospital within the British Army staffed by women. The women of Endell Street treated 26,000 wounded shipped back from the frontline throughout the war. When war ended the hospital stayed open to treat victims of the Spanish flu. Endell Street became renowned as the most popular hospital in the First World War – but that did nothing to help its women pioneers when peace came.

The women who ran the Endell Street hospital in World War 1 owed much to the women in medicine who came before them. In the case of Louisa Garrett Anderson, it was her own mother Elizabeth Garrett Anderson who had done much to lead the way. Becoming the first woman to qualify as a doctor in Britain, she ran her own dispensary and hospital while acting for 20 years as Dean of the first School of Medicine for Women.
CHARLIE FORMAN looks back beyond Elizabeth Garrett Anderson to the earlier and darker times for women in medicine  and then explores the monumental barriers that Elizabeth and likeminded women faced in getting anywhere close the mainstream of medical practice in this country.

WENDY MOORE is a freelance journalist and author of five books on medical and social history. Her latest book, ENDELL STREET, was a BBC Radio 4 Book of the Week.

CHARLIE FORMAN is an Arts Society Lecturer, a Westminster Guide, and part of the guiding team Discover Medical London. His talks and walks highlight the social, architectural and medical history of London focusing on the forces that have shaped and changed the metropolis and the cultural and medical heritage they has left us. His publications include Spitalfields: A battle for Land.