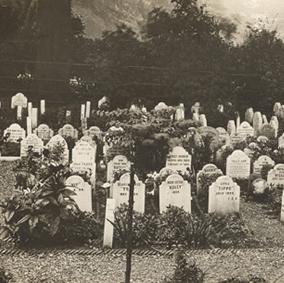 WALKIES IN THE PARADISE GARDEN

Hyde Park Pet Cemetery was opened in 1881 and became the final resting place of many dogs and cats, as well as a monkey and countless birds. The epitaphs on their stones quote everything from Shakespeare to the Bible and offer a fascinating insight into the Victorian mentality.

It seems names for pets were no less silly then – the headstones bear inscriptions to Scamp, Smut, Chin Chin, Pupsey, Chips and Fattie among others. Originally each grave had its own area for flowers, but the owners of the pets have long passed meaning only grass is seen here today. The cemetery became so popular with the capital’s pet owners that it had to close to new burials in 1915. Not everyone appreciated its charms however: George Orwell commented that is was ‘perhaps the most horrible spectacle’ in London.

The walk will begin at Speakers' Corner to take in Tyburn Gallows, and then continue through the park stopping off at various interesting locations (Reformers' Tree, the site of the planned assassination of Oliver Cromwell), and ending the experience at the Pet Cemetery – the jewel of the walk!

The walk has been devised and will be led by Jonathan Grun, a journalist who is also a City of Westminster Guide Lecturer. He recently appeared in a television documentary telling the grim story of the Tyburn Tree.