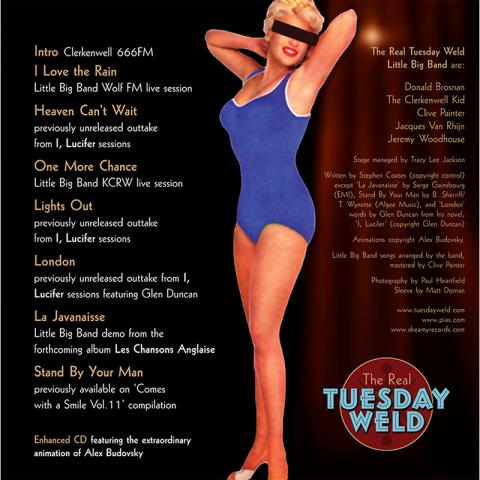 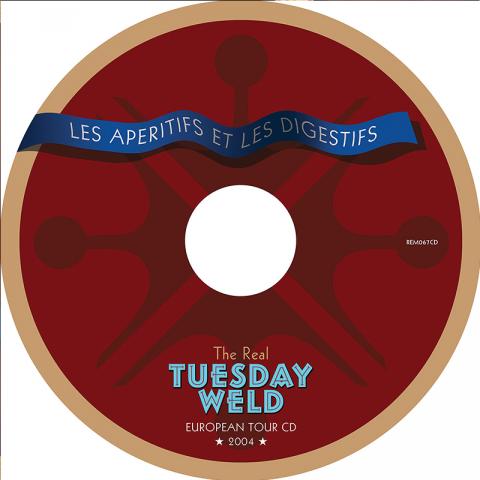 We have a very limited number of copies of The Real Tuesday Weld’s special Tour CD from 2004 containing unreleased songs, radically different live takes of old songs together with wonderful cover versions of Tammy Wynette’s ‘Stand By Your Man’ and Serge Gainsbourg’s ‘La Javanaisse’.

Special guests iclude Martyn Jacques from The Tiger Lillies, Pam Berry from The Pines and the author Glen Duncan.

This is a little album The Real Tuesday Weld made before they toured the US in 2005 – a kind of tour cd.  Some tracks were alternate versions of ones from I Lucifer and The Return of the Clerkenwell Kid.  Of these, Pam Berry singing ‘The Pearly Gates’ is my favourite although Tiger Lillies’ Martyn Jacques’ original version of Someday is pretty amazing too.  I wrote that song for my father but it was also meant as a song from a father to a lost son.

Others were previously unreleased: Glen Duncan reading from I Lucifer in ‘Eden’ or the Psyche and Cupid mini French film romance of ‘Lights Out’.  The cracked 78rpm version of Tammy Wynette’s “Stand by Your Man” reminds me (like the song  “Easter Parade” from The Return of the Clerkenwell Kid) of my days as a cross-dresser.  It was used the other year as the score for a book trailer for Stephen King’s latest collection of short stories – see below.  You may also enjoy the vicious pigeon gore fest of Tina Roland’s stop motion film for “Someday”

Often times, the live versions of album songs are radically re-worked or re-imagined and some like ‘One More Chance’ or ‘Anything But Love’ were included here to showcase the wonderful talents of The Real Tuesday Weld bandmates.