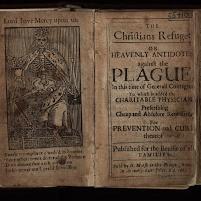 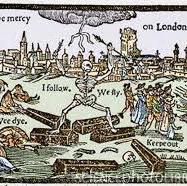 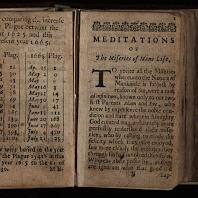 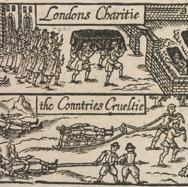 SARS, Bird Flu et al. have thankfully remained the stuff of nightmare and legend to us  - as yet - but London's past is pockmarked with pestilence and pandemic. To mark 350 years since the Great Plague of 1665, the Doctors Elma Brenner and Matthew Green pay a house visit to the Salon to pronounce on the state of a sick city.

A soundtrack for the city will be provided by The Clerkenwell Kid.
Hendricks will be on hand to provide for those taking the cure.

Time lord Doctor Matthew Green returns to the Salon for the third time to report on the London of 1665. Drawing on his new book "London: A Travel Guide Through Time", Matt describes a tableau of urban horror -open plague pits, the howling of insane sufferers, the hell of Newgate Prison, the caustic make-up that poisons people & dissolves their faces, the much-overlooked Great Dog Massacre, corpses bursting in the summer heat Defoe's journal of a Plague Year - and more.

Plague tracts were texts offering explanations and advice produced from the time of the Black Death onwards. They often addressed religious matters, since divine intervention was perceived as one of the causes of pestilence.  Dr Elma Brenner of the Welcome Library examines one:'The Christians refuge'  a unique survivor of the 1665 pestilence, an advice manual on how to combat plague that was printed in London that year. This small volume, held in the Wellcome Library, London, is authored by ‘W.W.’, who can be identified as the biographer and humorous writer William Winstanley (d.1698).

Elma will discuss this remarkable artefact and consider it alongside earlier plague tracts and its contribution to the plethora of printed responses to plague in London in 1665.

Dr Elma Brenner is subject specialist in medieval and early modern medicine at the Wellcome Library, London, where she edits the Library’s Early Medicine blog channel

Dr Matthew Green is an historian and television broadcaster, with a PhD in the history of London from Oxford University. He writes historical features for the Telegraph and Guardian. His first book, London: A Travel Guide Through Time, is published by Penguin and out now, and he also runs immersive tours of London via Unreal City Audio.