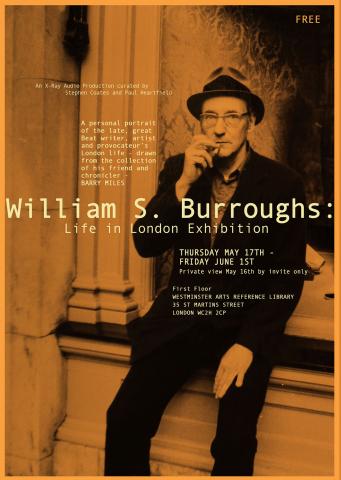 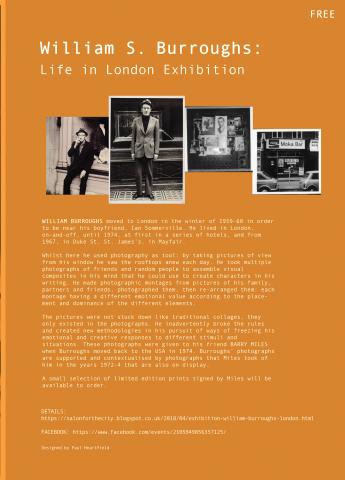 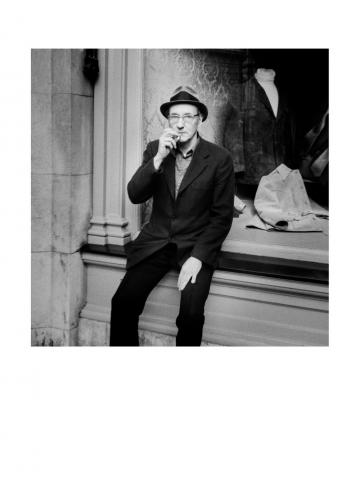 WILLIAM BURROUGHS moved to London in the winter of 1959-60 in order to be near his boyfriend, Ian Sommerville, who was finishing his studies at Cambridge University. He lived in London, on-and-off, until 1974, at first in a series of hotels, and from 1967, in Duke St. St. James’s, in Mayfair.

He used photography as tool: by taking pictures of the view from his window he saw the rooftops anew each day. He took multiple photographs of friends and random people to assemble visual composites in his mind that he could use to create characters in his writing. He made photographic montages from pictures of his family, partners and friends, photographed them, then re-arranged them: each montage having a different emotional value according to the placement and dominance of the different elements.

The pictures were not stuck down like traditional collages, they only existed in the photographs. He inadvertently broke the rules and created new methodologies in his pursuit of ways of freezing his emotional and creative responses to different stimuli and situations. These photographs were given to his friend BARRY MILES when Burroughs moved back to the USA in 1974. Burroughs’ photographs are supported and contextualised by photographs that Miles took of him in the years 1972-4 that are also on display.

At 2pm, 26th May, there will be a guided walk of Burroughs London with sixties underground publisher Jim Pennigton and writer Antony Clayton. Details HERE

An edition of 23 sets of three individual prints has been produced to mark the exhibition. To purchase a print go HERE

To watch the capital's chronicler of the counterculture BARRY MILES in conversation on the London life of WILLIAM S. BURROUGHS go HERE