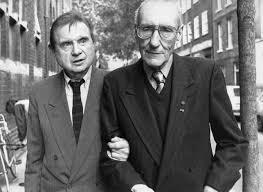 Before WILLIAM S. BURROUGHS achieved the status of an American myth, he moved around a lot, living in Mexico, Paris - and London - before kicking his heroin habit and moving back to the US.
This walk, led by writers DR WILLIAM REDWOOD and ANTONY CLAYTON and legendary underground publisher JIM PENNINGTON will take us time travelling through Burroughs’ West End years of 1967-1974.

We will visit his Soho, St James and Piccadilly haunts, discovering some very surprising facts  about the avant-garde, counter-culture guru; literary genius and beatnik junkie along the way.

And we will recall some of the London characters he interacted with: socialites; Scientologists, artists, musicians -  and rent boys

The walk will begin at Westminster Arts Library. We will meet in the first floor  exhibition of Burroughs’s London photos and ephemera from the personal collection of counter-culture writer and Burroughs’ biographer BARRY MILES

Barry will be in conversation with historian Frank Rynne on Burroughs' time in London May 30th at Salon for the City. Details HERE

DR WILLIAM REDWOOD is an esoteric researcher and anthropologist.