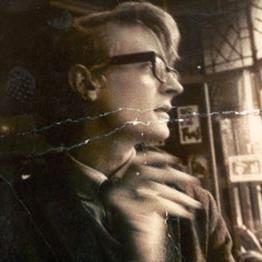 Each ticket includes a shot of Hendricks Gin Cocktail

A very rare opportunity to join the capital's chronicler of the counterculture BARRY MILES in conversation with historian FRANK RYNNE on the London life of the beat writer WILLIAM BURROUGHS.

The evening will take place during an exhibition of Miles’ personal photos and ephemera of drawn from the years Burroughs lived here the exhibition will run May 7th - June 2nd and on Saturday May 26th, we will be hosting a guided walk of Burroughs' London with writer Antony Clayton and esoteric scholar Dr William Redwood.

London’s posh St James district is probably not the location most associated with the avant-garde,occult guru; literary genius; dystopian visionary; wife-killer and beatnik junkie William S Burroughs. But,drawn to the city by love for his boyfriend John Brady, he lived quietly there during the years 1967-1974. And he was pretty busy.

Whilst living in Duke Street and other London locations, he wrote The Ticket that Exploded, The Wild Boys and The Job whilst working on his cut-up audio and photographic experiments. He also found time to hang out with male prostitutes, cottage in the loos of Piccadilly Underground Station, shop at Fortnum and Masons and join The Scientologists.

He even carried out a ‘space-time’ disruption on the Soho espresso bar Moka in response to the discourtesy and ‘poisonous cheesecake’ he had received there (successfully apparently, as the cafe subsequently closed)His friends included Christopher Gibbs the "King of Chelsea” and alleged inventor of Swinging London, artists Francis Bacon and Brion Gysin - and the counterculture chronicler BARRY MILES.

Join us for a very special evening when Miles will recall his literary friendship with Burroughs and the characters of the circles they moved in during those strange London days.  Miles will be in conversation with historian and music producer FRANK RYNNE upholder of the Burroughs and Beat legacy.

BARRY MILES is an English author known for his participation in and writing on the 1960s London underground and counterculture. He is the author of numerous books on the Beats, including biographies of Allen Ginsberg, Jack Kerouac, Charles Bukowski and two on William Burroughs: ‘El Hombre Invisible’ and ‘William S. Burroughs- A Life.’ He has written a book on The Beat Hotel, as well as catalogued Burroughs’ archives and compiled his bibliography. His other books include biographies of Frank Zappa and Paul McCartney.
In the 1960s, he was co-owner of the super influential Indica Gallery and helped start the independent newspaper International Times. He remains friends with many of the surviving icons of the era and had unrivalled insiders view of the so called Swinging Sixties and Beat Generation.

Basically, he was there.

FRANK RYNNE is a historian and Senior Lecturer of British Studies at Université de Cergy-Pontoise outside Paris.  In 1992 he co-organised the Here to Go Show which was the first major exhibition focusing on the paintings of William S. Burroughs and Brion Gysin. He researched the book Man From Nowhere: Storming the Citadels of Enlightenment with William Burroughs and Brion Gysin (Dublin, 1992).

Since 1994 he has worked with the legendary Master Musicians of Joujouka as producer and manager. He has produced many recordings including Joujouka Black Eyes and 10%: File under Burroughs for the Sub Rosa label and his latest music production is Master Musicians of Joujouka, Live in Paris, recorded at Centre Pompidou Paris in 2016 and due for release in the Fall of 2018. The concert which he also produced was part of the museum's major Beat Generation exhibition of that year.