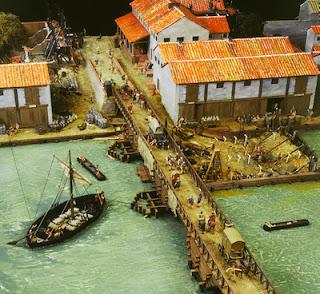 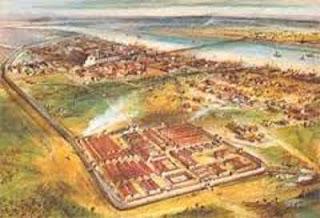 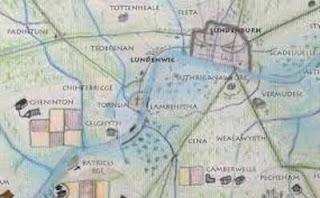 SALON NO.45: LONDON BEFORE LONDON

People started living in the lower Thames Valley a very, very long time ago. After about 450,000 years the Romans turned up, bridged the Thames and founded Londinium. It was followed by Lundenwic, a saxon settlement and then the little known Norman Lundenberg. Join historians BOB COWIE and MICHAEL MARSHALL to uncover the Londons before London..

At its height in AD 120, Londinium was home to about 45,000 citizens - measly by the standards of today's megalopolis perhaps - but enough to make it the biggest city Britain would see for well over a thousand years.

Though of all the skeletons discovered to date, only one, 'The Spitalfields Woman', was actually from Rome, in other respects Londinium was The Eternal City in miniature, with its own gladiators,  chariot races, an amphitheatre, a forum, sewers and baths - basically all the accoutrements of civilised life. Museum of London archaeologist MICHAEL MARSHALL  will bring his time machine to the salon and take us back through the millennia to explore this far flung outpost of the empire and the first British city through the artefacts it left behind.

Then, BOB COWIE, project officer of Museum of London Archaeology, will take up the story. Whereas Londinium is still somewhat with us - in its artefacts, in the 'Square Mile', in the fragments of London Wall and in the patterns of the Guildhall paving, the settlements that succeded it and preceded our own are now virtually invisible.

Londinium was abandoned in the late 5th century and its haunted ruins must have filled travellers with awe until some again began to occupy the land a mile to the West. Bob will take us on an imaginary tour through an mediaeval pageant of the settlers, immigrants,  and invaders who made their lives in the riverside Anglo-Saxon Lundenwic and the  vanished traces of the later Norman Lundenburgh built amongst the ruins of the Roman city.

MICHAEL MARSHALL is Prehistoric and Roman Finds Specialist at MOLA, Museum of London archaeology,  where his work involves identifying, recording and interpreting artefacts. He has worked on material from across Britain dating from the Palaeolithic to the post-medieval period but has a particular interest in Bronze Age, Iron Age and Roman finds
BOB COWIE Is a Project Officer and one of MOLA’s most experienced field archaeologists. His urban projects include high profile and complicated excavations, such as important Saxon sites at the Royal Opera House and National Gallery Extension, in London. HE is an experienced lecturer, and regularly teaches courses in ‘Anglo-Saxon and medieval Britain’