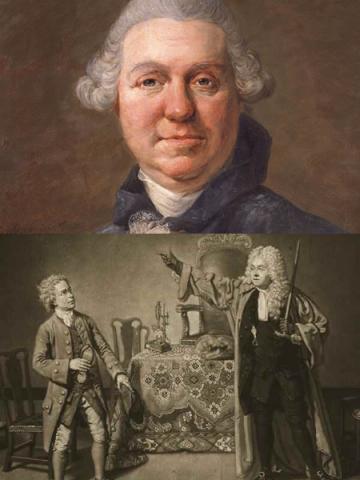 In this talk award-winning historian Ian Kelly not only uncovers the tragicomic tale of this Oscar Wilde of the eighteenth century, but he tells the story of the first media storm and the first victim of celebrity culture, and offers a joyous hop around the mad theatre of London life - high and low.

In 1776 Foote's was the most talked-of name in the English-speaking world. By 1777 it was almost unmentionable. Samuel Foote, friend of David Garrick and Dr Johnson, is the greatest lost figure of the eighteenth century; his story defies belief and has only been forgotten for reasons both laughable and shocking. Foote wrote the first true-crime bestseller, was the first celebrity impressionist and lost his leg after a bet with the Duke of York when a practical joke went disastrously wrong. Out of this was born the most singular career in stage history.

Ian Kelly is a multi-award winning actor and author, whose work, Mr Foote's Other Leg: Comedy, tragedy and murder in Georgian London, aligns his unique twin-careers. One of his previous books, a biography of Casanova, received universally rapturous reviews and was named Sunday Times Biography of the Year. With unprecedented access to Vivienne Westwood, and her full co-operation, Ian Kelly's most recent book is the story of the woman behind one of the last remaining independent fashion houses.